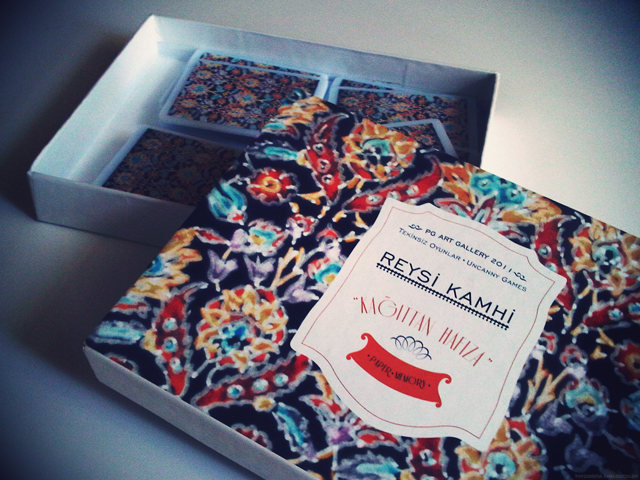 Pg Art Gallery’s exhibition project for the months of September and October, introduce the viewers to art works in an unusual context. The exhibition will be realized simultaneously with the Istanbul Biennial in the Tahtakale Bathhouse, replacing the sterile environment of the gallery, primarily funded by Roman.

Under Öznur Güzel Karasu’s curation, artists working in different media will work with the different meanings of the concept of “games,” interpreting the playful situations that we encounter in our daily lives. The artists are emphasizing the different roles we play within the social  fabric, what kinds of games we are subjected to within the system, our imaginary games, games that we participate in like children, cheerful games, games of benefits, cultural games and games of perception, while focusing on the ominous nature of our quotidian existence. In this exhibition, art becomes a tool with which one can get out of social systems that are initially defined with unknown ends. In the mental journey of intuitions, we are met with equations relating to the intellectual searches.

Artists participating in the exhibition

Constructed during the reign of Mehmet II (1451–1481), Tahtakale Bathhouse is one of the oldest Ottoman Monuments and also the largest bathhouse in Istanbul. It was sold to the Foundations’ administration after WWI and the new owner was unable to determine how to manage the bathhouse for a while. It functioned as a cold storage space in the 1980s. The historic bathhouse provided Eminonu and Istanbul with ice and also stocked up cheese at one point. Dogan Kuban restored the structure and it is now used as a business center.
—Press release for the exhibition, Uncanny Games, for which Reysi Kamhi’s project was commissioned.

Leibniz uses Paper Memory to define a museum—an autonomous institution in which a library, a documentation center and a data bank co-exist.

The most attractive thing for me about the bathhouse is that the space lost its real functions. This architectural space was constructed for a particular function, immersed in history. Today, transformed into a fragment of a modern life, the bathhouse, consequently gained two meanings:

With this memory cards project that I titled Paper Memory, I try to interrogate the mystical part of the bathhouse and its symbolic value in our memories.  As in our childhoods, by playing with memory cards, we are forced to perform the ritual of forgetting and remembering, in this way, we will notice in present time, the transformation of the bathhouse by looking at the abandoned objects yet the ruins and the objects sanctify the memories.
—Reysi Kamhi

I have always associated the concept of a hamam, a Turkish bathhouse, with mystery. Never having had the experience of being bathed in a hamam, hamam being a very commonly linked “thing” to Turk-ness, I have always wondered about the enclosed, public space where people chose to become intimate, both physically and emotionally; talk, share, cleanse and then go home, a lighter, cleaner, better version of themselves.

Ferzan Özpetek then forever tainted my idea of a hamam by charging it with his own narrative of two men, who fall in love while restoring a derelict hamam, whose relationship transform not only themselves, but those close to them. I remember thinking, there is something very poetic about the notion that a simple restoration of a common, functional space could stand in for the negotiation of private and public, old and new, universally human and locally cultural. I was mesmerized by the potentiality of the space of a hamam, where we could all be literally naked and just hang out (as long as we are of the same gender, of course.)

With writer’s pride, I wish I could say that I started writing on Reysi Kamhi’s Paper Memory by going off on a tangent. I realized, soon after staring at the empty screen, that I couldn’t not let this be about my memory and my associations of the hamam. After all, the artist invites me to take this approach by dividing the space of the hamam into images, that I’m forced to remember and understand and associate, if I’m to be successful in the game that she has constructed. Kamhi’s project, founded on the notion of an ominous game that was to be site-specific, is ominous only insofar as the personal, the internalized is ominous. She draws on the viewer’s fear of amnesia, which becomes the very material that sustains and prolongs engagement. Kamhi’s project is an attempt to re-work this lack of memory by setting up a game in which objects are remembered, undoing the amnesia.

Memory is particularly menacing to architectural spaces. As cities, functions change, spaces are abandoned, re-appropriated, re-claimed, instrumentalized and altered. The mystical space of the bathhouse is charged with stories, situations and relationships that were never recorded.

Kamhi’s project is a gesture. By creating a game that subtly draws on our lack of memory, the artist employs our own relationship with the bathhouse to reiterate the importance of commitment and recollection. The ominous nature of the images is unsettling yet the desire to look is overpowering, so we keep playing.

By situating herself in the local economy of the bathhouse*, Kamhi serves the bathhouse. The artist is not an addition to the bathhouse, but rather, a minor yet important part for the space’s function today. This utilitarian element draws on the idea of Kamhi contextualizing herself as being a part of this space rather than an interventionist.

Kamhi’s project is a poetic yet political gesture; the artist is firmly involved with what the bathhouse is now, while underlining what was. And it is the was that exposes the is. In this temporal continuum, the viewer is forced to find their own engagement.

As such, the above serves as the author’s testimony of that very engagement, hoping to transliterate the experiential into the verbal. Thus, it is a humble participation in Kamhi’s game, saluting the enclosure that the artist has created with and through this game.
—Merve Ünsal

*The game cards for Paper Memory were created site-specifically for Tahtakale Bathhouse. I wanted to sell the editioned (20) boxes of game cards in the toy shop at the entrance. I was aiming to collaborate with the local merchants and diverge from the idea of separating the exhibition from them. However, as things went unpredictably, I had to collect the boxes from the toy store after only a few days.