Skip to content
The below article was commissioned by The Empire Project to be included in the catalogue accompanying Erdem Küçükköroğlu’s  exhibition in December 2011. 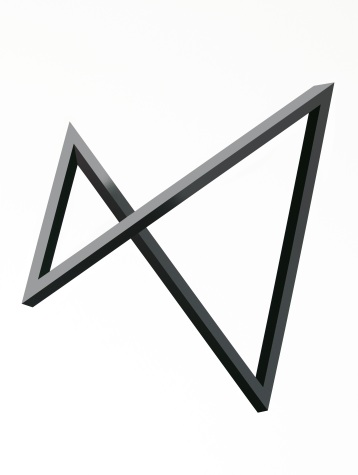 When math is used in art or music, it is transformed from mathematical convention into something else through a presentation of tensions that math is only a constituent of.  The inability to spot how other fields or disciplines are liquidated and transformed into art, and not vice versa, is a common misconception today that shows how little art or other disciplines are understood categorically as social artifacts, which clearly indicates an inability to go beyond them in the current defeatism of art via immateriality.  (author’s emphasis) [1]

—Bret Schnedier, “No Way In: An Angle on Contemporary Geometric Abstraction”

Erdem Küçükkoğlu’s geometric universe, constituted by basic elements such as color, light, line, stands out with the peculiar images it articulates. The artist’s formal world is reminiscent more of a mathematical universe than an artistic construction, interwoven with triangles, circles and other geometric shapes; the artist does not merely project geometry into art, but rather, he subjectively invades the geometric truth in an artistic and painterly manner. In order to understand this territory, it is necessary to understand art and other disciplines, such as mathematics, as equally cultural domains, as articulated by Schneider above. Only this kind of a perception can open up possibilities made available by the slippage between disciplines. It is only through this very perception that the viewers can get over the estrangement triggered by Küçükkoğlu’s works. The mental freedom behind the creative process furthers the artist’s efforts beyond a mathematician’s or geometric painter’s approach, as can be observed in the independence of the compositions and tonal expressions.

Küçükkoğlu began his trials with two-dimensional color blocks that covered the whole canvas that led to the current freedom in Mehmet Güleryüz’s studio in the 2000s. These attempts paved the way for the artist to discover his own formal universe. His brush strokes independent of form and shape that enabled the artist to capture his own formal expression are articulated by Mehmet Güleryüz:

The thing that an individual can accurately find is color. However, all tendencies start with shape. Shape is something that is learned, chosen and developed. This is why we start with color, but if you ask where the shapes are, the answer is in the way that the color is applied. What is hidden behind the application of color is … Even understanding the problematics of even a flat surface. When a color block is applied, what kind of a line character is concealed? This is a very critical point. It is necessary to be able to see this with other people. What is the shape of a flat area? I think the energy of a flat area is the energy of the line. [2]

After three years of color block studies, it is possible to see the linear search in Erdem Küçükkoğlu’s paintings that Mehmet Güleryüz had foreshadowed. What is striking in this period and in the artist’s overall development as a painter is his development of style, influenced by Ottoman and Far-Eastern calligraphy. In this period, Küçükkoğlu worked with black-and-white compositions for the first time and applied calligraphic lines’ two-dimensional relationship to the fore and background to geometric drawings. His drawing was carried on to a subjective realm, similar to the calligraphies that he took as examples, in which depth was defined by movement and gravity of different lanes. Furthermore, his free-hand drawings on paper in 2004 and 2005 become simpler and clearer expressions when compared to the large canvases.

A second important breaking point for Erdem Küçükkoğlu’s works is the answers he sought for the question that popped into the artist’s head in 2006, “What’s a geometric sculpture like?” The artist’s quest that began with this question leads to 800 drawings in tens of notebooks. The drawings that became voluminous over time, that were always related to each other, gain a completely new dimension with the addition of the Möbius strip [3] on which M.C. Escher’s works on infinitude and relativity were founded. As such, none of the lines in the artist’s drawings is over another; the geometric structure exists on a three-dimension, endless, gravity-less universe. Similar to Escher’s 1953 “Relativity” in which stairs always returned to where they started, Küçükköroğlu’s surfaces meet at unpredictable, impossible points. This paradox becomes particularly contradictory when the artist starts describing his images with light and shadow in 2009. In some of these works, even the slightest tonal change calls into question the relationship between the foreground and the background; an object that is perceived to be three-dimensional can become two-dimensional in the absence of light. Thus, in Küçükköroğlu’s works, “through created voluminosity and with the use of light, [sometimes] the object is charged with its opposite state.” [4]

In this context, the most striking aspect of Küçükkoğlu’s works to be exhibited in The Empire Project’s exhibition space in 2012 is “the personal source of light that describes the geometric truth.”[5] The exhibition consisting of 30 works that were applied to canvases from small Japanese album drawings, “Drawings for the geometric sculpture,” is a fiction that flies, dissipates and disintegrates. The pieces that seem to have been dispersed by an explosion are mandatorily within the boundaries of the frame. The circular canvases do not contain the images; each frame has a section that extends to the outside. These forms that come from infinity, are caught by our eyes through a hole, right where they meet. Balance, in this universe without gravity, is enabled by dimensional transitions created by the object’s positioning within the frame and light games. 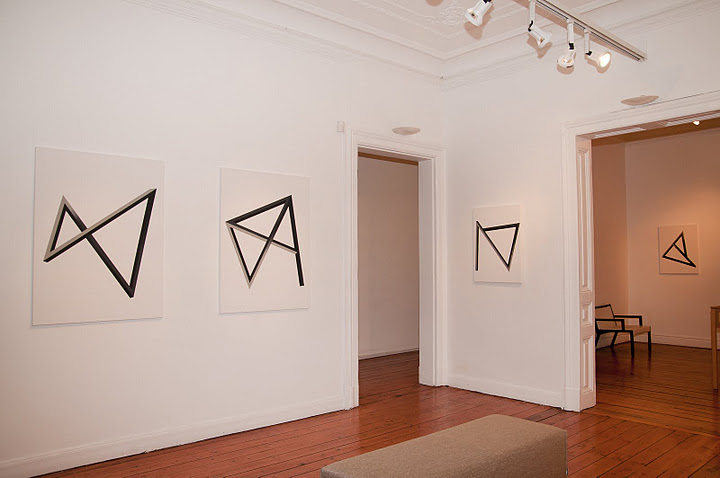 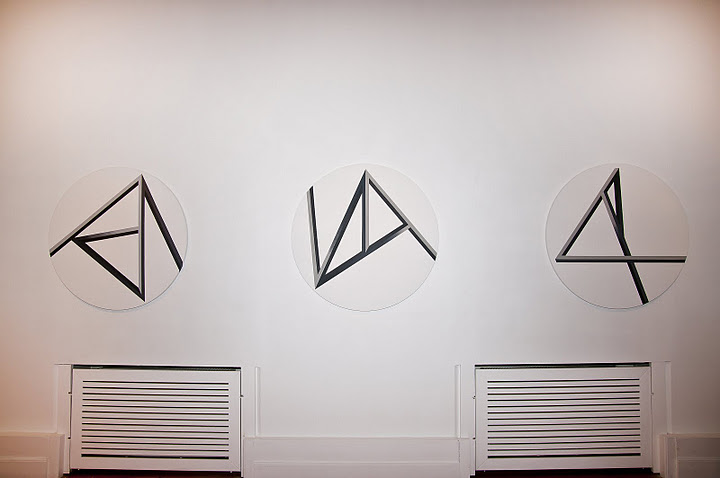 In Turkey, when paintings that are not realistic depictions of nature are considered to be taking “risks,” Erdem Küçükköroğlu seems to have delineated his own path by insisting on the geometric abstract, consistently. His subjective universe, which is strange to the viewer—almost erroneous—is a potentially apt, truthful reaction against our lives, dominated by perfect geometries and virtual realities.
—Elif Gül Tirben

Erdem Küçükköroğlu was born in 1979, İstanbul. He has a bachelor degree of science in mathematics from İstanbul University (2004). He studied art and painting at the ‘Mehmet Güleryüz Studio’ between the years 2000 and 2004. He became the member of UPSD, National Comitee of ‘Association Internationale des Arts Plastiques’ (AIAP) in 2001. His paintings are both in private and museum collections, including Osten Drawings Museum (Skopje) and Davis Museum (Barcelona). Currently, he lives in İstanbul and works as Graphics Designer.

Elif Gül Tirben is a free-lance writer based in İstanbul. Her research interests are Sociology of Art, Contemporary Art and Visual Culture.

[3] The Möbius strip has several curious properties. A line drawn starting from the seam down the middle will meet back at the seam but at the “other side”. If continued the line will meet the starting point and will be double the length of the original strip. This single continuous curve demonstrates that the Möbius strip has only one boundary.