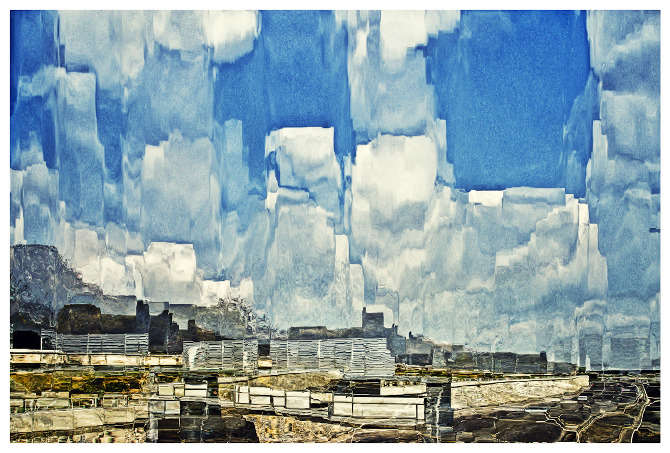 The word ‘Seyir’ is one of the comprehensive words in Turkish—it means taking a journey from one place to another, to look and also to daydream. Pieces in this exhibition are the outcomes of a two year period of looking, wandering and researching.  (Seyir, C.A.M Press Release, 2012)

Your first solo show Seyir is composed of two complimentary series: Seyir and Ahırkapı.[1] Could you talk about the cumulative meaning of these parts and how the two are related?

Seyir consists of the images I’ve made following every metro-bus station starting from Söğütlüçeşme to Avcılar in İstanbul. Seyir exhibits a naïve attitude; it is more like research and data collecting. For this project, I shot the surroundings of each bus stop on the metro-bus line. Ahırkapı, on the other hand, is significant for my personal history. I spent part of my childhood in Ahırkapı. My grandparents were lighthouse keepers.  They were the ones who actually lit the lantern. In the production stage of Ahırkapı, I scanned the visual archive I collected over the last 2-3 years. To me, this meant both a return to the past and going back to the depot, where the stalls are. In a sense, Ahırkapı continues the visual language of Seyir. However in Ahırkapı—different from Seyir—I wanted to enter the buildings and say something about the people living there. I also distanced myself from the impressionistic effect that looks like brush strokes or marks of spatula. 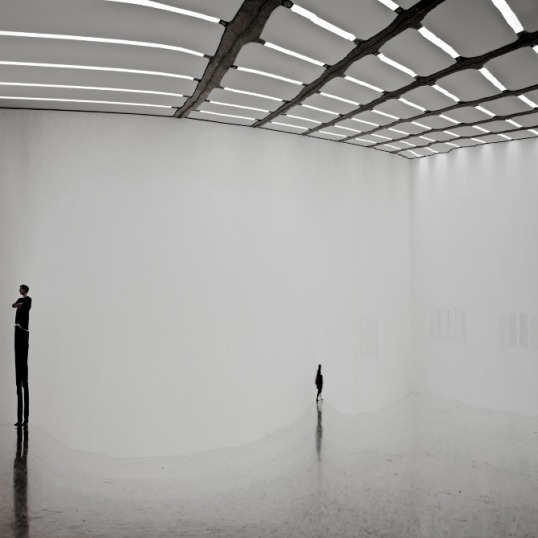 Yes, despite the digital manipulation, in a sense your work in Seyir looks closer to painting compared to the previous series such as Ay(ıl)ma Kareleri or Portraits. That particular digital effect was more evident in those series.

That digital effect is inevitable in close-up works. The details show because I work closer. Pixels come forward. There is no such effect in landscapes. Landscapes inevitably are closer to painting. When you look at the history of photography, the first thing was not to take a portrait but to take a picture of the street like in the works of Niepce and Daguerre. Niepce and Daguerre thought about how the eye processed information—the artists at the time worked on easily reproducing the landscape and the interior, which had previously only been produced in paintings.  They succeeded in this matter at the time. Later, the studios started working on portraits.

Do you know what the final work will look like at the initial stage or do you work it out in post-production?

At the beginning I act according to an internalized aesthetic understanding, with basic design principles and I say “I need to shoot this!” Meanwhile, I see or imagine that it is going to be a “good photograph.” That actually creates a certain satisfaction. But later, I want to tell it subjectively or I want to add something to what I say. After that each photograph transforms quite easily. If you try to do that in painting, you put too much effort on it.  But I think, although it takes less time, the same amount of cerebral labor is spent.

It seems like your works also has a metaphysical content. In Seyir, the sky settles on to the city, crushing it and in some of your works, things are lightened up; in Ahırkapı, the internal spaces extend up like cathedrals; the figures are lost in the undefined spaces of the fictional perspectives.

I don’t have any interest in metaphysics. My concern is to go into the rules of tradition such as the Renaissance perspective. The wall…where does it start and where does it end? Where is the breaking point in perspective? Is there another place in between in the corridor here or not? Is a different visual accumulation possible? When you start to ask these questions and go beyond certain rules, the works might have a metaphysical effect.

I actually try to disobey. Somebody makes the camera and he also decides how you should use it. This dictates a particular visuality. You cannot take a shaky or flu photo. Photoshop is also the same.  It has certain rules. There are tools you can use but there are forms of using these tools. Just as you can’t saw with a hammer, you can’t use certain tools outside of their defined functions. This is very limiting and oppressive.

Are there any artists or movements who inspired you in that sense?

Actually it is better to say there are attitudes that I am influenced by rather than artists and movements. One is not only influenced by artists but authors, politicians and attitudes as well. But to give a specific example, early 20th century artists inspires me. They were given a machine and tried lots of different things. Man Ray is one of the artists that effects me the most; he experimented with the facilities of the machine in his hand; he tried solarization, reogram …

But also, although not experimental, subjectivist photography of the 60s placed photography as a more spiritualistic, individualistic art.

We have to realize that nowadays, everybody catches the moment. Everybody is familiar with an unbelievable amount of visual information. When people see a photograph they ask whether Hipstematic or Instagram filters it.  Using these filters I also take pictures and enjoy doing so. But again there are 8-9 filters and a generation’s visual perception is constructed by them. This way, a certain nostalgic aesthetic becomes the norm again.

That plays with your perception of time. Present and past gets mixed together. How do you construct your relationship with time?

Our time is not the time for big changes. It is important trying to change the things that you can reach. But Turkey is like a time machine and it stops every ten years. Photography does a similar thing. I also try to stop time for an instant. Referencing Walter Benjamin, Charlie Gere explains that the first morning during the French Revolution the clock towers were shot simultaneously to stop the time. That symbolizes breaking the time and switching to another epoch. It is a symbolic revolt. Later, starting from the 60s and 70s hackers do a similar thing, they say ‘you have built a system but look I’ve broken it down!’. They break the everyday life and stop the time. I also try to do a similar thing by disrupting the figures, spaces, using the facilities I have.

[1] Ahirkapi is the name of a district in Istanbul, which can be translated as “stall door”

Murat Durusoy was born in 1985. Graduated from Sabancı University with a B.S Degree in Manufacturing Systems Engineering and with an M.A Degree on Visual Arts and Visual Communication Design. Durusoy currently lives and works in Istanbul. His interest areas are Photography, Interaction Design, Cybernetics, Syncretism, Time Based Imaging, Digital Art , Subjectivist Photography and Abstraction in Photography.

Elif Gül Tirben is a free-lance writer based in İstanbul. Her research interests are Sociology of Art, Contemporary Art and Visual Culture.