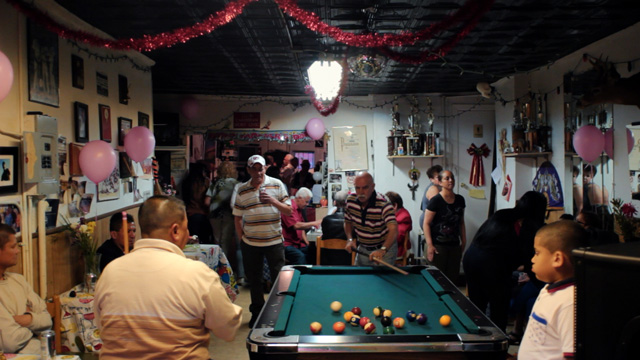 Urban gentrification is at least as much about time as it is about space. With the arrival of new public transport connections, comes faster-moving bodies. As rent increases displace long-time residents, relationships developed over many years change virtually overnight. When the greengrocer around the corner turns into a trendy ecostore, what once belonged to the domain of the everyday becomes iconified. History accelerates in gentrified neighborhoods, and time gets confined within tightly defined spatial boundaries.

The above listed impacts of gentrification are well known, and have been scrutinized in cultural works on the subject. But while many have pursued such scrutiny by way of verbal articulation, few have actually endeavored to undertake it aesthetically—that is, through form rather than mere content. The need for a shift of attention from content to form becomes especially urgent in the case of works that deal with socio-politically contested issues such as gentrification. As numerous critics have demonstrated (increasingly frequently since the late 1960s), unless content becomes form the political engagement of art is only half-achieved—in Herbert Marcuse’s words, “the political potential of art lies only in its own aesthetic dimension.”* If Beyza Boyacıoğlu and Sebastian Diaz’s short documentary Toñita’s can be considered a socio-politically engaged work, this is not because it just “talks” about gentrification’s impacts (in this case, its impacts on time and temporality). It is because the directors mobilize the aesthetic dimension to negotiate those impacts through form.

Toñita’s is the better-known name of the Caribbean Sports Club in the Brooklyn neighborhood of Williamsburg. This is an area of New York that has historically hosted members of various ethnic groups with a relatively recent migration background. Many a Williamsburger from such background has been pushed out due to the rapid gentrification that has been underway in the neighborhood since the mid-1990s. Among those displaced are members of the neighborhood’s Hispanic (mainly Puerto Rican and Dominican) community. Toñita’s is their last remaining hangout in Williamsburg, as its counterparts have all had to close up shop due in one way or another to the upscaling of the neighborhood.

As the directors strive to demonstrate, Toñita’s is much more than just a sports club. Serving purposes as diverse as those of a card room, nightclub, and soup kitchen, it is a place where multifunctionality is not a design feature but a somewhat intuitive way of using architectural space that has evolved gradually over many years. In an era when the notion of “public space” is undergoing crisis in cities across the world, Toñita’s presents to us the communal and gratuitous use of space where we least expect to find it: within the interiors of a privately owned club. “She provides a community service,” explains one of the interviewees in the film, talking about Maria Toñita, the namesake owner of the club and long-time resident of Williamsburg. “It’s like a hobby,” says the owner herself, speaking lightly of what others see as selfless benevolence. In this intermingling of private and public, work and play, and urban and interior, time resists acceleration and compartmentalization into neatly defined slots.

While making Toñita’s, Boyacıoğlu and Diaz have made numerous decisions as if to highlight this resistance—and, more importantly, to do so not only textually but also cinematically. Adopting a near-ethnographic scrupulousness, the directors choose to examine a quintessentially urban phenomenon such as gentrification from within the microcosm of a social club. Many of the key characters featured in the documentary appear in not a structured interview setting but in their everyday environments. Nor have the interviews been rigidly edited to provide us snippets of supposedly relevant information such as the interviewees’ thoughts on gentrification. Rather, these interviews converge filmic and real time, and thus provide the viewer with the opportunity to get to know Toñita’s regulars—an effect enhanced thanks to the prioritization of close-ups. Cinematography keeps pace with the changing rhythm of the club: when it is time for party the camera is handheld, when life slows down so does the picture, helping the viewer feel a certain intimacy with life at Toñita’s. But the documentary also avoids the illusion that viewers can fully identify with what is happening in and around the club, and does so rather inconspicuously. This is thanks to the overall cycle of the documentary, which is somewhat compatible with that of a single day—an editing decision that naturally goes unnoticed until the very end. The intimacy between Toñita’s social circle and the viewer, which the directors gradually build throughout the movie, thus very subtly gives way to a healthy alienation as we are made aware that indeed only a day is how long we have known Toñita’s for.

Perhaps an additional challenge for the directors to take up could have been to explore their own subjectivity in a way more direct than that which staying behind the camera permits. The relationship between artists and gentrified neighborhoods is far from tension-free. The former are often seen as catalysts of the latter, thus making the relationship between the two a topic of heated debate. Exposing some of the tensions that may have arisen out of the directors’ work in Williamsburg would have made an important contribution to this debate. This begins to happen when one of the interviewees becomes slightly agitated (inferably at a question she is asked about her way of life) but is somehow cut short without being pursued further. Her agitation is a brief indication of some of the aforementioned tensions, but also a glimpse into the possibility of a more self-reflexive exploration of gentrification through art that deserves to be expanded. While its lack is expected given the scope of a 20-minute film and in no way undermines the many achievements of Boyacıoğlu and Diaz, such an exploration is something to look forward to in the feature documentary that the directors have heralded. 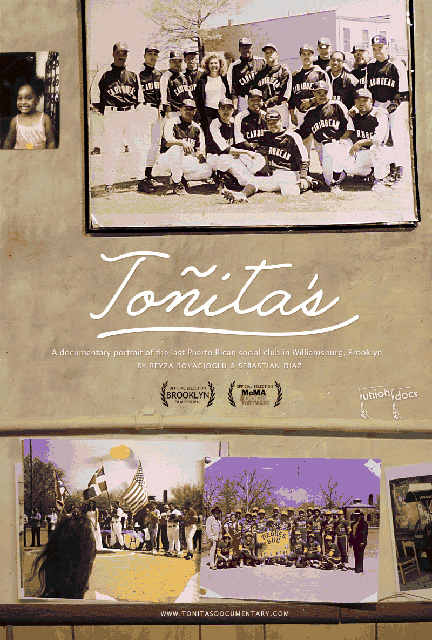 Synopsis of Toñita’s
Toñita’s is a portrait of the last Puerto Rican social club in South Williamsburg, Brooklyn. The short documentary dives into the microcosm of The Caribbean Club, fondly labeled “Toñita’s” after its owner Maria Toñita, in order to talk about urban space, displacement and identity. While the film zigzags between observational club scenes and the testimonies of its regulars, it explores the notorious past of the neighborhood and the residents’ mixed feelings towards gentrification. Music and dance constitute a crucial part of the film as Toñita’s is a love letter to Nuyorican culture.

Beyza Boyacıoğlu is a Boston-based documentary filmmaker, video artist and curator. She was a fellow at UnionDocs Collaborative Studio in 2013 where she co-directed the short Toñita’s. She curates ‘Fiction-Non’, a documentary series exploring narrative/non-fiction hybrid films, at Maysles Cinema in Harlem. Her work as a video artist has been exhibited in many venues including MoMA (New York), The Invisible Dog Art Center (Brooklyn), NoteOn (Berlin), and Sakip Sabanci Museum (Istanbul). In fall 2014, Beyza will begin her studies in the Comparative Media Studies graduate program at MIT, where she will be a researcher at Open Doc Lab.

Sebastian Diaz is a Mexican filmmaker and artist, based in New York. His award winning feature documentary Brilliant Soil tells the story of Herlinda, one of the few Purepecha potters who has switched to non-toxic lead-free glazes. Sebastian photographed and edited the documentary ‘Tijuaneados Anonymous’, which was a part of Ambulante 2010 and awarded best local film at San Diego Latino Film Festival 2010. He is a co-founder of Bulbo Media Art Collective, which produced a documentary format television show that has been transmitted in Mexico and the US about life in the Tijuana-San Diego border region, where he was raised. His work has been exhibited at ARCO (Madrid), The MAK Museum (Vienna), Museo Tamayo Arte Contemporaneo (Mexico City), InSite_05 (Tijuana-San Diego) and 2nd San José Biennial 01SJ Global Festival of Art on the Edge, among others. He was a fellow in 2012-2013 UnionDocs Collaborative Studio in Brooklyn where he co-directed Toñita’s.

Eray Çaylı is currently completing an interdisciplinary PhD at University College London (UCL). A collaboration between the fields of anthropology and architectural history, his doctoral research has looked into the ways in which historicity is negotiated through architectural memorialization in the forms of site-specific commemorative events, memorial museums and monuments. Alongside working on his PhD, Eray has designed and taught courses across UCL and beyond, exploring an on-site and object-based approach to discussing the relations between history, memory, space and place. Since 2008, he has also worked as a design and architecture critic for various monthly publications. For more on Eray see: http://www.eraycayli.com