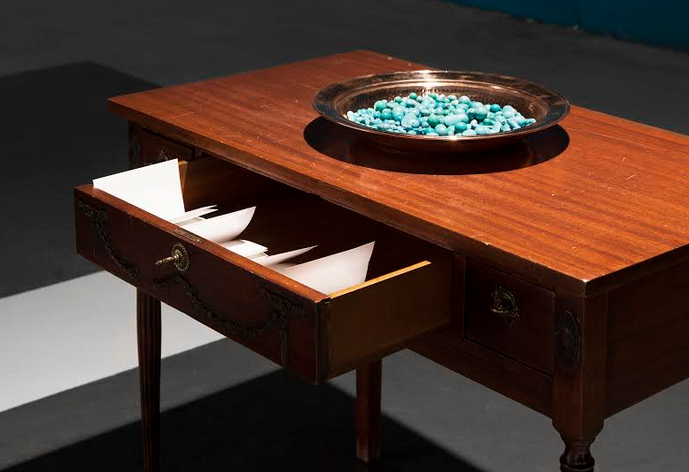 “It’s like a soup made with two carrots and ten gallons of broth,” an artist remarked during our conversation about The Moving Museum’s exhibition in Şişhane Otopark, held from 28 October till 14 December 2014. I, too, felt underwhelmed, given The Moving Museum’s extremely successful self-branding strategies and steady press output since its arrival in Istanbul in late last summer. Throughout the 3 or 4-odd months leading up to the exhibition, the city was abuzz with the self-proclaimed “alternative,” “nomadic” and “artist-focused” initiative harboring, in their words, the “intention to advance contemporary art and its organizational infrastructure, to provide significant changes for the participating artists, realized artworks, and new audiences as a result of [their] activities.” The decision to hold its third edition in Istanbul, following the Dubai and London iterations, was inspired by the political and social energy of Istanbul in recent years, according to cofounders and curators Aya Mousawi and Simon Sakhai. Given their stated interests and intents, one would think that The Moving Museum is anything but another vague, blockbuster mega-exhibition that employs buzz words like “nomadic” and “exchange” for lack of a focused curatorial vision or sustained social and intellectual engagement. Walking through the exhibition on opening night, however, it became quickly apparent that this was not the case.

The exhibition occupied three colorful floors of the 6-story Şişhane Otopark, a parking garage in the center of Istanbul. The lineup boasted 46 artists, 35 of which were international imports. All of the works were stated to have been produced during the 3-month long residency leading up to the exhibition. (However, as I understand it, participants arrived from abroad at different times throughout the residency period.) The press leading up to the event was positive, the interview questions carefully answered, and the initial vision was one to which I was sympathetic. The partnerships were carefully chosen as well, even down to the decision to consult the civic-conscious architectural firm ŞANAL when trying to find a venue.

There’s no question that promoting cultural exchange and drawing in new publics through art are admirable goals. However, certain core aspects of this project raise questions. The first is The Moving Museum’s claim that the exhibition venue itself—a newly-constructed underground parking lot in Istanbul, i.e., a default space of luxury allotted to those who own cars and are willing to pay to park them safely—is “a rare example of a public space” in the city. Such a decision on the part of the organizers may capture something akin to the feeling “of being a foreigner in Istanbul,” as the wall-text states the exhibition wishes to achieve. But surely it does not aid anyone in the task of “understand[ing] the complex web of politics underpinning the life and peoples in the city,” another stated aim of the project.

The questionable equation of a parking garage with public space aside, it would have been worthwhile to look into the history of Şişhane Otopark, both of the site itself and the people involved in its construction and financing. Along these lines, it would do the curators good to look at projects such as Burak Arıkan’s Networks of Dispossession (2013), an interactive map that outlines the relations between financial capital and urban transformation within Turkey, when they flock to the next up-and-coming, “booming” art city for The Moving Museum’s 4th edition. Moreover, what of the roster of artists, which reads like a “who’s who” of both emerging and established international cultural workers who—while undoubtedly talented and impressive—have nothing in common other than having landed in Istanbul for a short-term stay? Beyond the issues that inevitably arise when one tries to pack too much into a short period or single exhibition (which often results in a thin stretch of organizational attention and resources), one can’t help but question the disproportionate ratio of international artists to local artists. For an exhibition that purports to engage with the social and artistic fabric of the city, it seems curious that of the 46 artists, only 11 of them are based out of Istanbul or Turkey.

One of these is Lara Ögel, whose bare and nuanced installation touches on this problem, if indirectly. Taking the color of the floor in which her work is installed as her inspiration, she displays a bowl of turquoise stones atop an old wooden table. Alongside the bowl of stones is a small editioned artist book titled A Guidebook to Healing with Turquoise, which addresses the history of the color (its name was coined in the sixteenth century by a French traveler in Turkey, upon seeing the color adorning the walls of mosques) and its ancient therapeutic properties. The historical healing properties of the stone gain a heightened dimension against the backdrop of Turkey’s more recent political history, and indeed, even the recent construction of the parking lot. Interestingly, the guidebook also mentions that turquoise “stimulates and harmonizes the Throat Chakra,” so as to aid one to speak up and achieve wholeness in communication. If we consider this work alongside its context in a country and local art scene that has historically wrestled with regionalism and continues to struggle in finding its “voice,” then the fact that the curators of this exhibition failed to capture the breadth of Istanbul’s rich artistic landscape becomes all the more disappointing. In a way, Ögel’s installation calls attention to the difficulties of defining a local, critical practice against a globalizing homogeneity, not least when that globalizing homogeneity is couched in a critical terminology, as in the case of The Moving Museum.

Still, many of the participating artists made thought-provoking works, and these alone warranted a visit to The Moving Museum. Volkan Aslan’s Dear Ugly Future, envisioned by the artist as a “letter to the future,” employs plaster replicas of antique Greek heads adorned with hand-made twisted halos of bright neon light. A site-specific work, the heads line the ground floor of the parking lot, rendering the encounter with them reminiscent of an archeological excavation. But where one expects to unearth the antiquated marble relics of a bygone era—in a city composed of thousands upon thousands of layers of history—one is confronted with the concrete, plastic, and neon aesthetic of our current age. The work forces us to abandon our nostalgic impulse and compels the viewer to come to terms with where we are collectively headed, as Turkey continues to walk its current path towards unbridled economic growth and urban transformation. As such, Aslan historicizes the construction of the garage itself as well as the artificial garden built above it, both of which were ironically built on the grounds of what was until recently an actual park.

Other highlights include the mahogany and tulipwood sculpture Hastayım Yaşıyorum [I am sick, but I am alive], by Haig Aivazian, an artist, writer, and curator preoccupied with how narratives are told without losing sight of the individual. Focusing on Turkey’s minorities—namely, the histories of Armenian migration—his sculpture of what appears to be an elongated, closed pear-shaped Oud sound box was made in collaboration with an Istanbul-based luthier and was inspired by his research around the life of renowned Armenian musician Udi Hrant Kenkulian. Ming Wong’s video performance Yüz Karası [Disgrace], in which he transforms into his alter ego “Bülent Wongsoy”—an East Asian döppelganger of the legendary transgender Turkish singer Bülent Ersoy—is accompanied by a wall display of annotated translations of Ersoy’s song he performs to detail the process. Part of the artist’s ongoing research around the life and tribulations of Ersoy, whose performances were banned in Turkey for a period in the 1980s following the coup d’état, the work strongly resonates with the highly contentious conversation about sexuality and gender both in Turkish society and Asia. Leyla Gediz’s painting-based installation Jump Cut reflects in part on recent restrictive alcohol politics and problems in general with being in a Muslim country—not least how this clashes with Turkey’s catering to (European) tourists flocking here as the “hotspot” destination. Phillip Zach and Emanuel Rozzeti’s installation in the middle of one of the halls explores the spatial politics and construction projects of Istanbul, reaching an ironic climax as we are led from the stuffy environment of scattered materials to a wooden crate with a fan installed inside of it, reminiscent of air conditioning in enclosed shopping malls, as if to suggest that this is what in fact “sustains” the city. Ilya Karilampi’s work, where tags are photographed and then emblazoned and painted on particle boards, engages with Istanbul’s subculture and graffiti, offering the viewer a glimpse into the underbelly of the streets when the lights go out. Jeremy Bailey’s incisive and hilarious critique of online and art marketing strategies in The You Museum, essentially a stalking app where artworks stalk you, was also worth the visit, among other pieces.

The merits of the individual works aside, when viewed as a whole The Moving Museum exemplifies the dangers inherent in the way that a contemporary curatorial practice mobilizes a critical, sociopolitical language without any interest in sincerely engaging with the issues at hand. It demonstrates the ways in which a critical language can devolve into a mere branding strategy for curators, as a way to create a recognizable signature in a particular corner of the art world. It begins to sound strikingly similar to the language used in the international marketing of cities vying for “capital of culture” or the opportunity to host the next Olympics. Such endeavors will transform the city and the livelihoods of participating artists, we are told, offering themselves up as a sustainable “living, breathing catalyst for change.” Unfortunately, they often result in not much but sheer exploitation and disappear from memory the moment bags are packed up.

In a sense, this is a mutual exploitation. While the easy entry and enthusiastic responses may benefit international art workers in some ways, there is a scarcity of funding and institutional support for many working in the arts in Turkey. As a place where critical discourse around the arts is still being forged, Istanbul is an ideal city for emerging curators, armed with not much more than sophisticated language and a certain amount of cultural cache, to gain support for their projects. Furthermore, I can’t help but wonder what real advantages there are, if any, to having such a large pop-up exhibition and how the organizational team was able to respond to the individual needs of the participating artists.

These languages and practices are not unique to The Moving Museum, but one that is endemic to the globalized moment in which we currently live. But it would be my hope that instead of reproducing these norms, curators and other players in the art world would engage more critically with them and work to create alternative languages, exhibition formats, and labor practices that might better reflect the concerns of the cultural cohorts to whom they aim to speak. This critical moment in the evolution of Istanbul’s art world has the space and materials for an engaged artistic discourse to flourish. Let’s not squander this tremendous opportunity.

A shorter version of this article was first published in Time Out Istanbul (December 2014).

Şeyma Bayram (b. 1988) is a freelance writer and editor based in Istanbul. She received her BA and MA in Comparative Literature from the State University of New York at Binghamton. From 2013–2015, she was editor at BAK, basis voor actuele kunst, in Utrecht, where she collaborated on several readers, including the anthologies We Roma (2013) and Future Publics (The Rest Can and Should Be Done By the People) (2015), both part of BAK’s Critical Reader in Contemporary Art series. You may reach her at: seyma.brm@gmail.com.