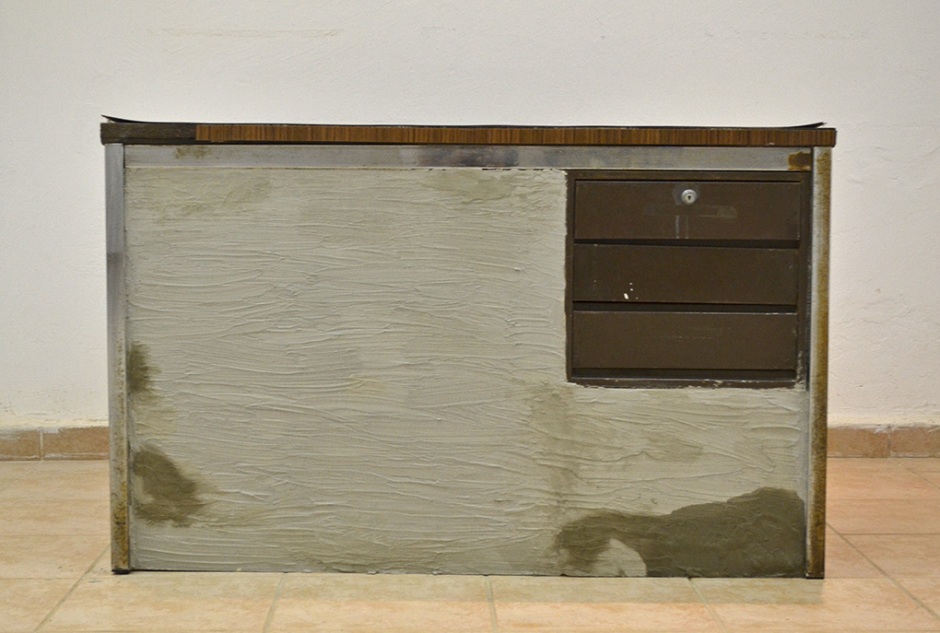 In her sculptural practice, Eda Aslan uses an absurd, Kafkaesque array of materials to create a web of micro histories that serve as testimonies to the tangibility of pain. Her interventions on familiar objects perform that which is difficult to articulate or give meaning to, assigning these “things” the role of speaking the unspeakable.

In her works, Aslan translates loss into situations and constellations that are charged with the guilt of survival, particularly pertinent in a geography where conscience permeates all the surfaces in all the spaces. Her shuffling of “things” create spaces that extend the temporalities of traumas. Horrible things happened, horrible things are still happening, and while it is not possible to mark the end of a trauma, Aslan shows that freezing things as they are, revealing them for what they essentially are as objects, catalyze the production a narrative of what might have happened.

Eda Aslan’s works imply bodies, both in the present and in the past. This expansive temporality picks on the interconnectedness of histories and peoples, resisting the hyper-specificity of states of exception that strip people of their rights. Her works are non-tombstones, non-monuments, holding onto an energy that encapsulates a potential threat and perhaps thus helping us, the viewers, neutralize it.

Eda Aslan (b. 1993, Istanbul) graduated from the sculpture department of Marmara University Fine Arts Faculty in 2017. She is currently pursuing her graduate degree at the same university’s painting department. In her work, she focuses on the concepts of history, space, and collective memory. The artist draws a sharp line between the past and the present, seeking to resist what is erased through the ephemerality of the now. Through exploratory techniques, she traces the archaic, the documentary in found materials. She has participated in group exhibitions including, Mamut Art Project (2017); You Left Behind at Kasa Gallery (2017); Young, Fresh, Different 7 at Galeri Zilberman (2016), and Siemens Art Borders Orbits 18 (2016). Aslan lives and works in Istanbul.

With thanks to Ali Emir Tapan, who initiated the conversation on Eda Aslan’s works and helped write the text.